In 2021, the Washington DC Chapter of the Acoustical Society of America held:

Participants were urged to get out cell phones, record 10 seconds, get an FFT image if possible, and send both a wav and jpg file to our officers.  We also asked them to gather any notes on the prevalence of cicada exoskeleton on the ground or trees, and note the date of your souls sample.  We were not able to offer a monetary prize, but the bragging rights for this honor were priceless!

This contest might also lay the groundwork for future studies (ie in 2038) for potential use of acoustics to gather data on cicada population.

We suggested that some of the Apps that may help contestants were:  For iPhone: SoundMeterX (‎SoundMeter X on the App Store (apple.com)) Can export raw audio files along with FT, spectrogram, SPL, etc.   For Android: Spectroid (Spectroid – Apps on Google Play) which can export spectrogram and FT, but no raw audio.   Hi-Q MP3 Voice Recorder (Hi-Q MP3 Voice Recorder (Free) – Apps on Google Play).   The audio is requested as a .wav files

2. The 2nd recording was made in Montgomery Village on June 4, 2021.  It was recorded with an Android cell phone, and the trees had a cicada on every branch, about 1 per square foot. 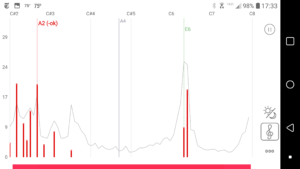